A Night with Laurie Anderson

by fascinationanxiety on February 23, 2018 in Art, Culture, Music

I often find myself thinking of Laurie Anderson. Her farewell to her husband, Lou Reed, written for Rolling Stone magazine five years ago, altered my perception of dying. I return to her visual description of Reed taking his last breaths in peace as she holds him in wonder, watching his expression in the moment of death. It was the kind of intimacy reflective of their twenty-year relationship: intimacy without sentiment, love without agony—the Buddhist way.

In this light, I would choose to describe Anderson’s performance last Friday at Town Hall in New York as poetry without sentiment. 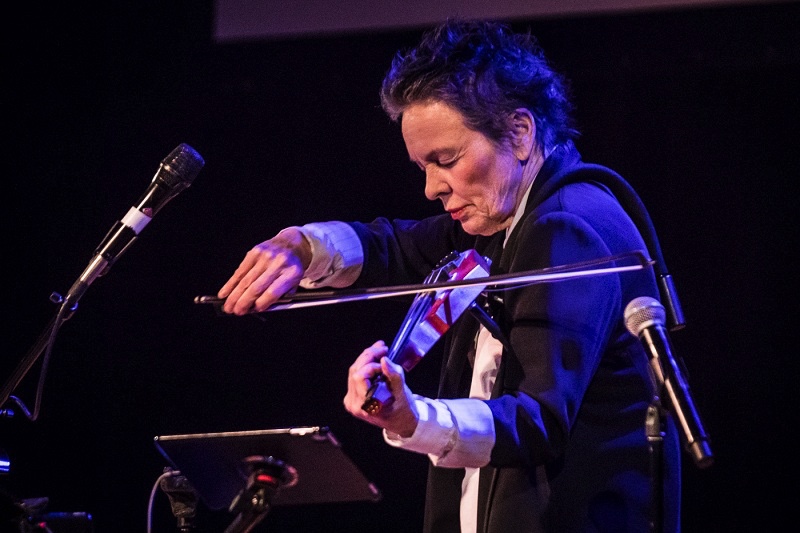 The performance is based on Anderson’s new book, All the Things I Lost in the Flood (Rizzoli), a self-curated retrospective in which she weaves together childhood memories, images, theory, lyrics, poetry, and prose into a complex and sensitive document encompassing the span of her nearly fifty-year career as one of the world’s most famous multimedia artists and a pioneer of electronic music, thus revealing the brilliant mechanics of her manifold mind.

It is hard to speak of the book without speaking of the performance, in which Anderson moves from one end of the stage to other, alternately sitting in a big chair and reading excerpts or going to her music stand to do a spoken word piece in her famous audio-drag voice, moving on to a gripping demonstration of her Tai Chi practice, and finally to giving a politically poetic lecture on Guantanamo and surprising us all with an unexpected guest: Chelsea Manning, whom Anderson is supporting in her run for Senate.

If I was expecting to see a woman broken by the loss of her beloved, or so much as mildly romanticizing her pain, I would have been disappointed. I must admit I was curious about how life without Reed would shape itself in Anderson’s performance, but what I experienced was an artist at work, a woman who, at the age of seventy, seems to use every bit of material that being alive has to offer in evolving, creating, and transcending the cliches of the human condition.

Of course, in the end she did speak of Reed and the greatest loss of all—the endless conversation they shared. I could feel her sorrow from my seat. I left the performance thinking of my own quest for love, meaning, and light in the current problematic landscape. How does a person living in the the age of disposable everything stay relevant, useful, and of pure mind? How does one inspire others to evolve and inspire? Who are our beacons? I also pondered a particular concept taken from Reed that Anderson had offered during the performance: the moment between thought and expression. My mind’s eye scavenged for “wise” images to situate in this in-between space. I succeeded in generating a vague image of myself as a child before I knew what guilt was.

A few days following the performance, Anderson gave a talk to promote her book at NeueHouse. I was able to ask her if I was correct in perceiving her as unsentimental, and could it be that her ability to strip events of sentimentality is what in fact gives her stories power. After some thought, she replied, “Lou used to say, between thought and expression…lies a lifetime.” It was the answer to every question. Thank you, Laurie Anderson, for your lifetime of service in raising the bar for love, art, death, and everything in between.

Laurie Anderson’s new book, All the Things I Lost in the Flood, is dedicated to Lou Reed.

What are you looking for?